Your Guide to the Pennsylvania Impressionists

A journey up the Delaware River

Learn more about Pennsylvania Impressionists through the river that dominated so much of their work.

In this December’s American Art Week, Freeman’s confirms its reputation as a destination for works by leading Pennsylvania Impressionists. American Art and Pennsylvania Impressionists Featuring the Collection of Virginia and Stuart Peltz, on Sunday, December 5, is led by marquee names of the movement—particularly those within the New Hope School—and the featured selection offers a tour of the region through shifting seasonal landscapes.

The Delaware River, despite its name, spans four states: Delaware, New Jersey, Pennsylvania, and New York. Its defining presence in New Hope, Pennsylvania, is part of what drew artists to settle in the region in the late 19th and early 20th centuries to capture its beauty. Known today as the Pennsylvania Impressionists, these artists flocked to Bucks County (and particularly the town of New Hope), where the Delaware’s broad, slow-moving waters run through valleys, colonial villages, and rugged quarries. 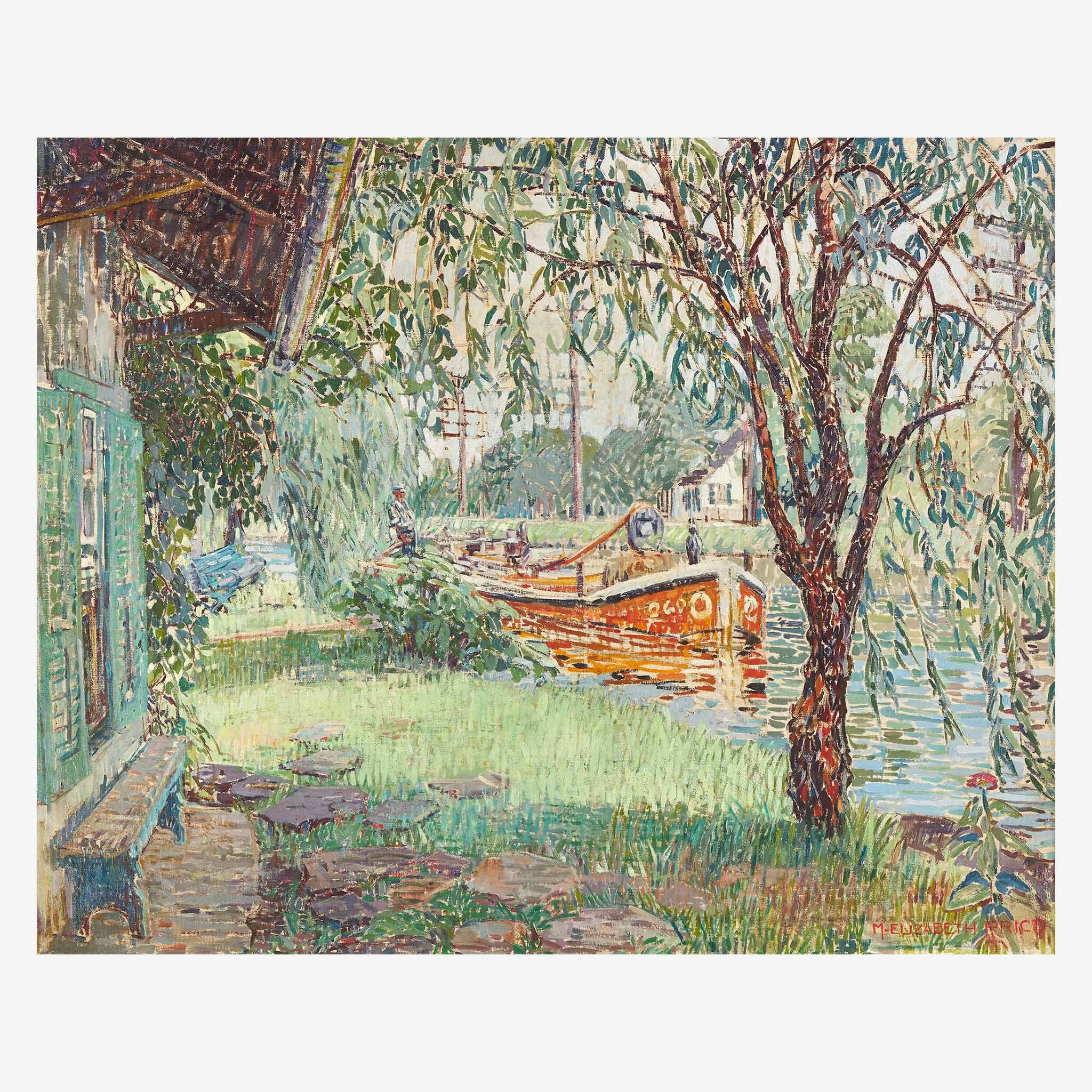 At the bottom of the river, near New Hope, Mary Elizabeth Price painted Cheerful Barge 269, which depicts a large tugboat passing in front of the artist’s own front yard on the Delaware Canal (Lot 102; estimate: $50,000-80,000). By the time Price painted the work in 1929, the canal was scarcely used, but still served a romantic, picturesque purpose for the Pennsylvania Impressionists—like Price, who offers a vision of a blissful summer day and invites us to engage in a moment of respite. 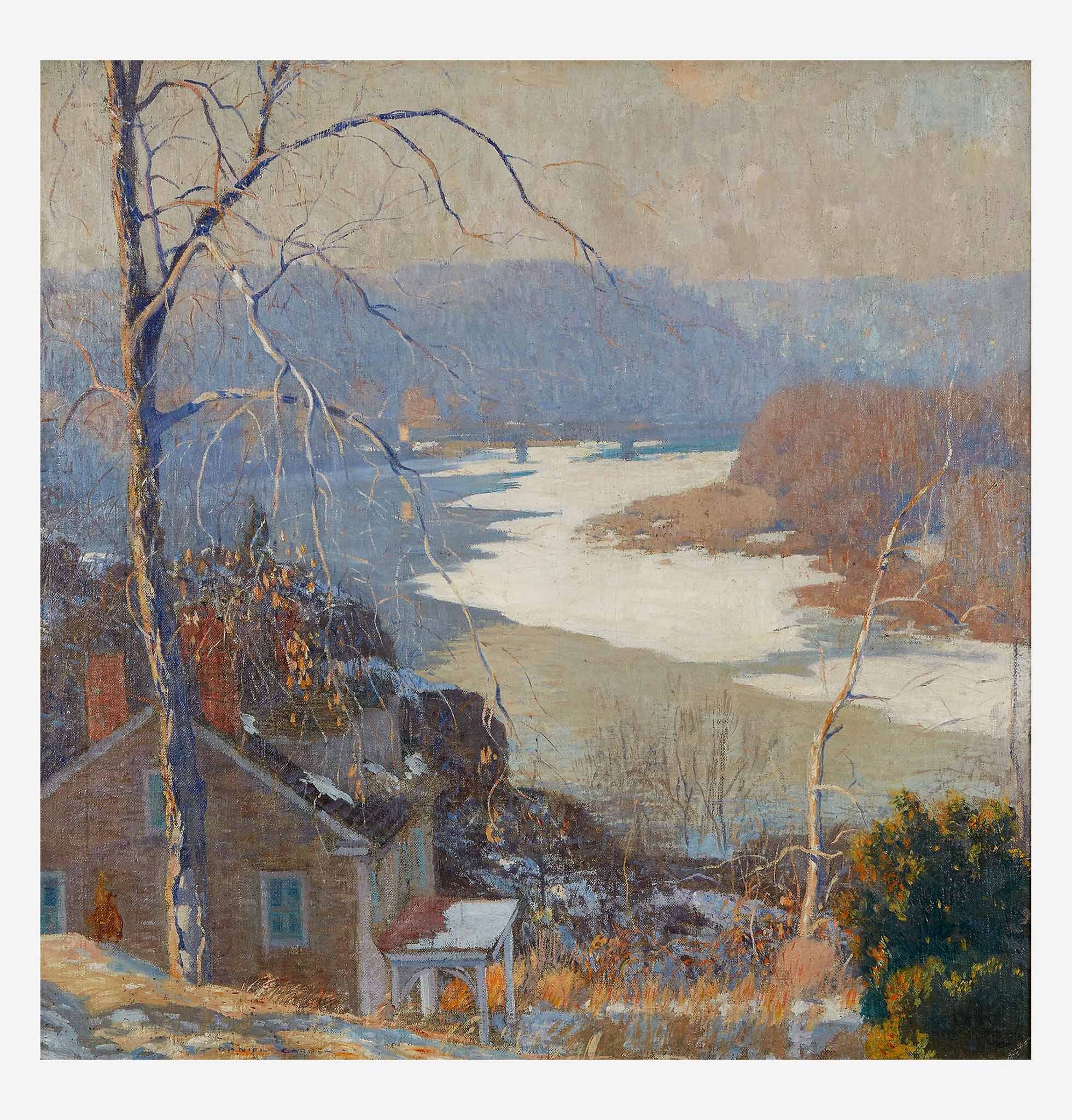 An artist who liked to stay as close to the river as possible was Daniel Garber, arguably one of the most famous artists associated with the group and one of the few who taught at the Pennsylvania Academy of the Fine Arts. Garber was known and celebrated for his richly colored and lyrical depictions of the Delaware River Valley, which he captured en plein air near his famous cottage, Cuttalossa. In canvases like Up the River, Winter (Lot 55; estimate: $150,000-250,000), Garber depicted expansive views of the not-yet-frozen Delaware toward the direction of Lumberville. 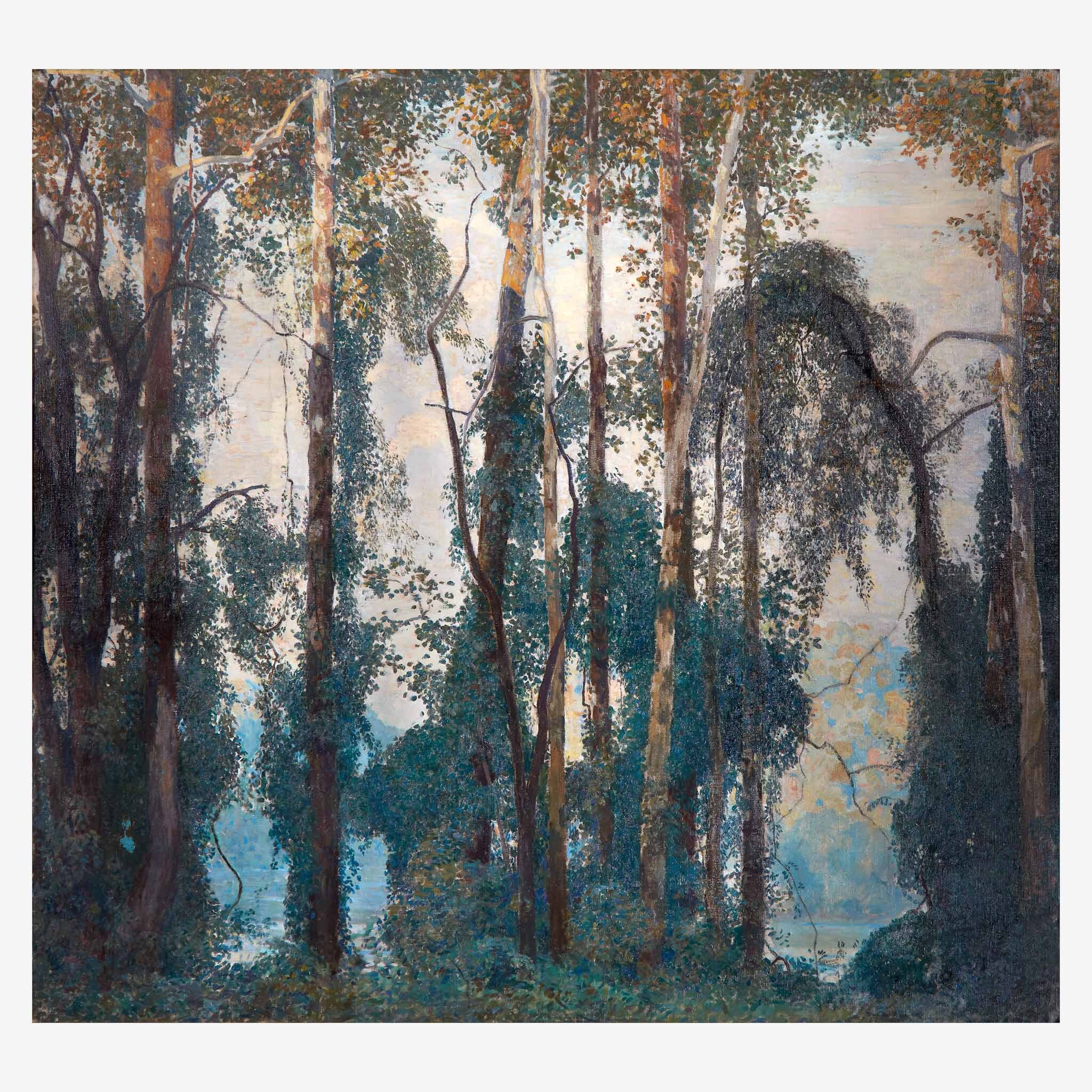 But Garber was traditionally seen as a painter of spring and summer, and liked to capture the magical light as it hit the leaves of trees, as shown in Sycamores (Lot 94; estimate: $300,000-500,000). The impressive 1923 painting shows a line of tall tree trunks set along the river whose tops are cut off by the upper edge of the canvas, through which one can spot a barely perceptible landscape on the horizon. Garber was fascinated with sycamores; in this composition, the trees act as a screen that purposefully obstructs the view, contributing to the famous “tapestry effect” associated with Garber’s technique. 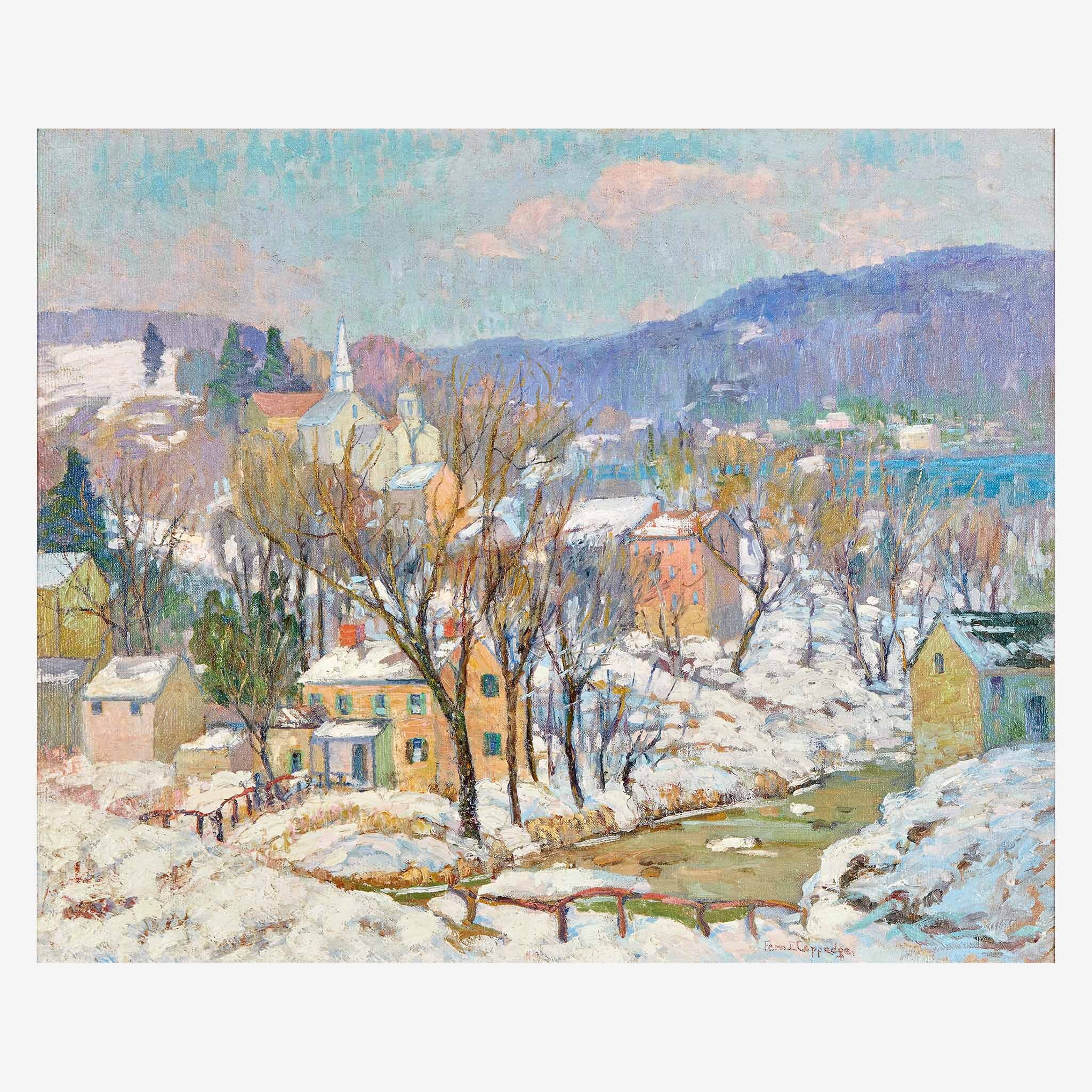 Garber’s neighbor and good friend Fern Coppedge was an intrepid plein-air painter, unafraid of the cold and snow. Coppedge was known for motoring through the Bucks County snow looking for just the right landscape to paint, then setting out on foot wrapped in a bearskin coat; she painted until her fingers were frozen. Coppedge tended to venture a bit further inland than Garber; her Snowy Country Side (Lambertville in Winter) (Lot 61; estimate: $60,000-100,000) depicts a winter day with the river flowing in the background. Coppedge liked to paint in the woods, especially in Carversville, where she painted the muddied-turquoise flow of the Paunacussing Creek. December Afternoon (Carversville) (Lot 58; estimate: $80,000-120,000) shows not only the creek, but the historic double-arched stone bridge in Solebury Township, which Coppedge here treats as a mosaic, outlining each squared stone with various shades of yellow, mauve, and blue. 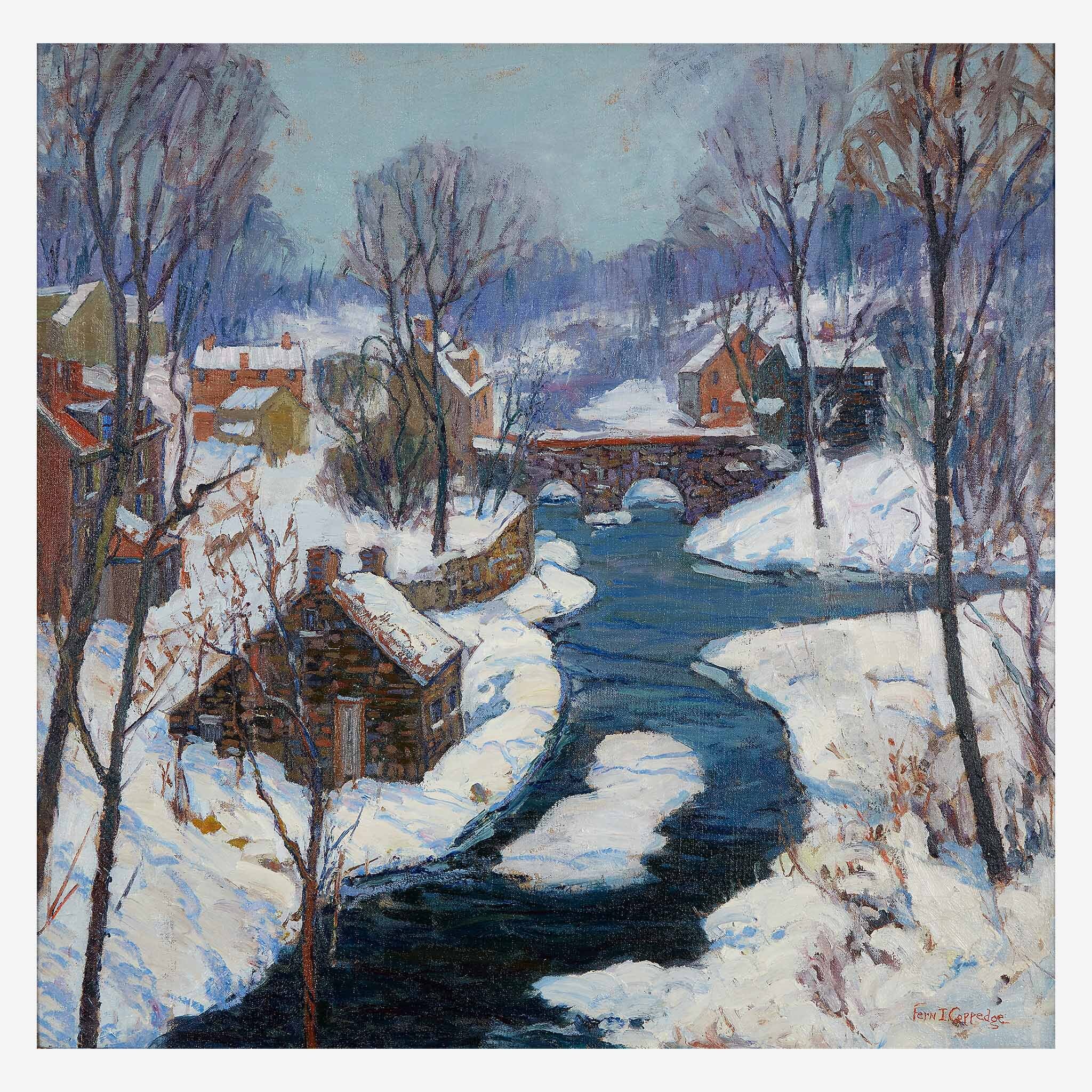 View the rest of our December 5 auction, American Art and Pennsylvania Impressionists Featuring the Collection of Virginia and Stuart Peltz.