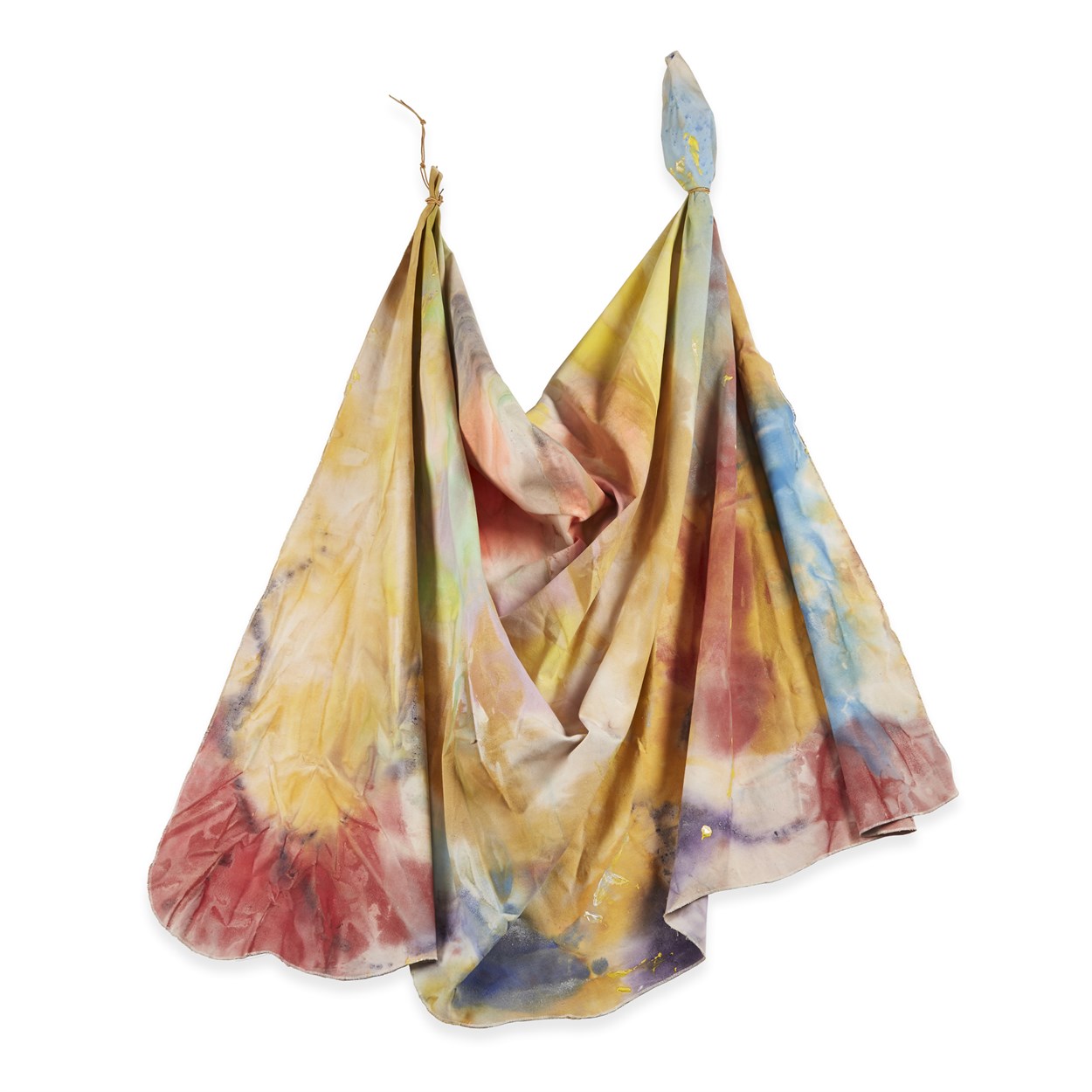 note:
This lot will be sold along with the artist's original sketch of the work.

We are grateful to the Gilliam Studio for their assistance in cataloguing this work.

Throughout his long and prolific career, Sam Gilliam has been variously associated with Color Field Painting, Abstract Expressionism and Lyrical Abstraction. Continuously exploring new aesthetic possibilities and employing experimental working techniques, the artist has defied strict characterization, drawing inspiration from each of these movements, while pushing his own artwork ever forward.

Gilliam first became interested in Color Field painting upon meeting Thomas Downing in 1963. Downing was a prominent member of the Washington Color School, a group which also included Kenneth Noland, Howard Mehring, Morris Louis, Paul Reed and Gene Davis. Together, these artists were interested in color as a primary subject, often applying it in large, flat planes and utilizing innovative methods to transfer it to the canvas. Gilliam, who had previously been largely influenced by the German Expressionists he had studied at the University of Louisville, was inspired by the group's philosophy and began to work on large-scale colorful paintings of his own.

By the mid-1960's, Gilliam had begun to undertake the work that has come to be considered his seminal achievement - his drape paintings. In them, he liberated the canvas from its stretcher, pouring and staining it with acrylic and metallic paints that spread and mingled as he manipulated the fabric. He then draped the canvas from a wall or a ceiling, allowing it to hang, fold or move in ways not previously conceived. In so doing, the work became both painting and sculpture, forever altering the way we perceive the picture plane and its limitations. As the artist recalled, "paint and surface took on an added, third-dimensional reality. Now the canvas was not only the means to, but a primary part of, the object. The suspended paintings began by celebrating the working process and ended with the involvement of the wall, the floor, and the ceiling. The year 1968 was one of revelation and determination - something was in the air, and it was in that spirit that I did the drape paintings."

"Idylls I" is an excellent painting from this critical period of Gilliam's career. Painted in 1970, the work exhibits wide swaths of expressive color that move gently across the canvas. The glimmering highlights of metallic paint highlight the artist's interest in light and its effect on the colors and textures woven into his paintings. Hanging from two rawhide ropes at its upper corners and energized by the volumes of its folds, the sculptural quality of the work is unmistakable, reflecting Gilliam's unique and lasting artistic contributions.

Barbara Silby acquired "Idylls I" in 1972 from Jefferson Place Gallery in Washington, D.C. At the time, she was working at the gallery, where she came to greatly admire the artist's work. Her collection also included "East II" (lot 98). Barbara would come to be friends with Gilliam and his then-wife, Dorothy, all of whom were residents of the Washington, D.C. area. Freeman's is pleased to bring these treasured works to the market.